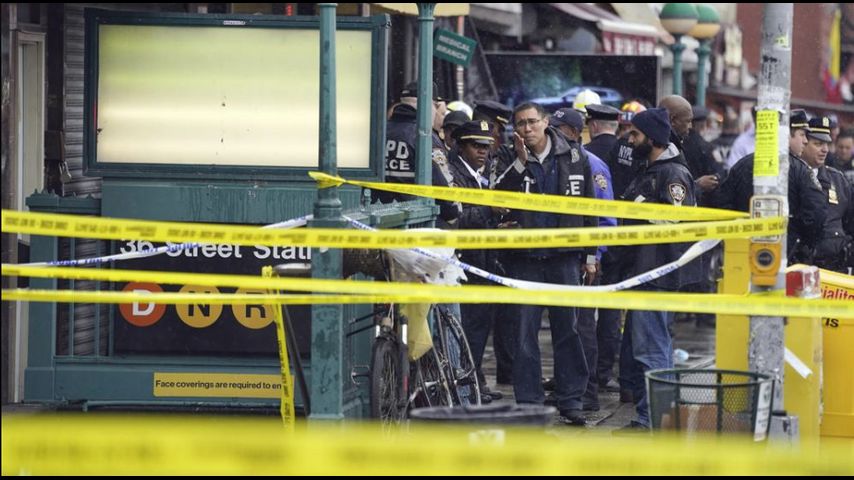 NEW YORK (AP) — A gunman in a gas mask and a construction vest set off a smoke canister on a rush-hour subway train in Brooklyn and shot at least 10 people Tuesday, authorities said. Police were scouring the city for the shooter and found a rental truck possibly connected to the violence.

The NYPD has named a person of interest in the shooting.

This is Frank James who is a person of interest in this investigation. Any information can be directed to @NYPDTips at 800-577-TIPS. pic.twitter.com/yBpenmsX67

A scene of horror unfolded as frightened commuters ran from the train as others limped out of it. At least one rider collapsed on the platform.

“My subway door opened into calamity. It was smoke and blood and people screaming,” eyewitness Sam Carcamo told radio station 1010 WINS. Smoke poured out of the train car as the door opened, he added.

Five people were in critical condition but expected to survive. At least 29 in all were treated at hospitals for gunshot wounds, smoke inhalation and other conditions.

The gunfire erupted on a train that pulled into a station in the Sunset Park neighborhood, about a 15-minute ride from Manhattan and predominantly home to Hispanic and Asian communities.

Police Commissioner Keechant Sewell said the attack was not being investigated as terrorism, but that she was “not ruling out anything.” The shooter’s motive was unknown.

Authorities gave officers a photo they believed to depict the gunman, and the Arizona license plate number of a U-Haul truck to look out for, two law enforcement officials said. By early evening, police found a matching, unoccupied U-Haul van in Brooklyn, one of the officials said.

Police were closing off a street about four miles from the shooting scene and clearing nearby businesses while awaiting a bomb squad and the highly specialized emergency services unit.

Investigators recovered a handgun at the scene, along with multiple smoke devices and other items they are analyzing, said the officials, who were not authorized to discuss the investigation and spoke on condition of anonymity. They said the suspect is believed to have had at least two extended magazines.

Investigators believe the weapon jammed, preventing the suspect from continuing to fire, the officials said. The federal Bureau of Alcohol, Tobacco, Firearms and Explosives has completed an urgent trace to identify the gun’s manufacturer, seller and initial owner.

The attack unnerved a city on guard about a rise in gun violence and the ever-present threat of terrorism. It left some New Yorkers jittery about riding the nation’s busiest subway system and prompted officials to increase policing at transportation hubs from Philadelphia to Connecticut.

The Metropolitan Transportation Authority announced last fall that it had put security cameras in all 472 subway stations citywide, saying they would put criminals on an “express track to justice.” But the cameras apparently malfunctioned in the station where the train arrived, Mayor Eric Adams told WCBS-AM.

One rider’s video, shot through a closed door between subway cars, shows a person in a hooded sweatshirt raising an arm and pointing at something as five bangs sound. In another video, smoke and people pour out of a subway car, some limping.

Other video and photos from the scene show people tending to bloodied passengers lying on the platform — some amid what appear to be small puddles of blood — and another person on the floor of a subway car.

Rider Juliana Fonda, a broadcast engineer at WNYC-FM, told its news site Gothamist that passengers from the car behind hers started banging on the connecting door.

“There was a lot of loud pops, and there was smoke in the other car,” she said. “And people were trying to get in and they couldn’t, they were pounding on the door to get into our car.”

As police searched for the shooter, Gov. Kathy Hochul warned New Yorkers to be vigilant.

“This individual is still on the loose. This person is dangerous,” the Democrat said at a news conference just after noon. “This is an active shooter situation right now in the city of New York.”

Fire and police officials had responded to reports of an explosion, but Sewell said at the press conference that there were no known explosive devices. Multiple smoke devices were found on the scene, mayoral spokesperson Fabien Levy said.

After people streamed out of the train, quick-thinking transit workers ushered passengers to another train across the platform for safety, MTA system chief Janno Lieber noted.

High school student John Butsikaris was riding the other train when he saw a conductor urging everyone to get in. He thought it might be a mundane problem until the next stop, when he heard screams for medical attention and his train was evacuated.

“I’m definitely shook,” the 15-year-old told The Associated Press. “Even though I didn’t see what happened, I’m still scared, because it was like a few feet away from me, what happened.”

No transit workers were physically hurt, according to their union. Besides gunshot wounds, the injured riders were treated for smoke inhalation, shrapnel and panic.

In Menlo, Iowa, President Joe Biden praised “the first responders who jumped in action, including civilians, civilians, who didn’t hesitate to help their fellow passengers and tried to shield them.”

Adams, who is isolating following a positive COVID-19 test on Sunday, said in a video statement that the city “will not allow New Yorkers to be terrorized, even by a single individual.”

New York City has faced a spate of shootings and high-profile incidents in recent months, including on the city’s subways. One of the most shocking was in January, when a woman was pushed to her death in front of a train by a stranger.

Adams, a Democrat a little over 100 days into his term, has made cracking down on crime — especially on the subways — a focus of his early administration, pledging to send more police officers into stations and platforms for regular patrols. It wasn’t immediately clear whether officers were already inside the station when the shootings occurred.

Danny Mastrogiorgio of Brooklyn had just dropped his son off at school when he saw a crush of panicked passengers, some of them wounded, running up the stairway at the nearby 25th Street station. At least two had visible leg injuries, he said.

“It was insane,” he told the AP. “No one knew exactly what was going on.”

Allan Lee was running his business, Cafe Nube, when a half-dozen police cars and fire vehicles suddenly converged on the block that contains the 36th Street station.

“Then they started ushering people that were on the block to the adjacent block and then closed off the subway entrance,” Lee told the AP. When he noticed bomb squad officers and dogs, he was certain it was no everyday subway problem.

Source of this news: https://www.wbrz.com/news/nypd-locates-van-names-person-of-interest-in-brooklyn-subway-shooting/

Livedrive Review | Cheap & easy to use, but it lacks features - ProPrivacy
Pricing LiveDrive is a cloud backup service that can be purchased either for personal backup requirements or by businesses for commercial backups. The service offers three different plans for consume...
DDOS Attacks Targeting Payment Services of Global Financial Institutions - Security Boulevard
A threat actor or group is actively targeting the online services of branches of global financial institutions with their headquarters located in Europe. Radware Cloud DDoS Protection Services prev...
Dallas Invents: 136 Patents Granted for Week of Sept. 14 » Dallas Innovates - dallasinnovates.com
Dallas Invents is a weekly look at U.S. patents granted with a connection to the Dallas-Fort Worth-Arlington metro area. Listings include patents granted to local assignees and/or those with a N...
Unable to remove proxy server 127.0.0.1:86. - Virus, Trojan, Spyware, and Malware Removal Help - Ble...
Hi there, I hope I can get some help on this issue as I have tried everything I can . I am stuck with this proxy server http://127.0.0.1:86/ which I cannot remove. I have tried in rege...
The Cacophony Of Many Different Server Markets - IT Jungle
September 13, 2021 Timothy Prickett Morgan Considering how skittery the global economy is, how wonky the world’s supply chains are, and how capricious spending by the big public clouds and the...
Microsoft Exchange server being hacked through ProxyShell exploit - Illinoisnewstoday.com
An attacker has exploited a vulnerability in ProxyShell to aggressively exploit a Microsoft Exchange server and install a backdoor for later access. ProxyShell is the name of an attack that uses thre...
Four New Maps Added To 2019's Call of Duty: Modern Warfare can KeenGamer News
Image credit: Infinity Keep Points new multiplayer maps have been added to the seemingly lost Call of Duty: Leading-edge Warfare as part of the mid-season update for Warzone and Bl...
New differential fuzzing tool reveals novel HTTP request smuggling techniques - The Daily Swig
White paper systematically examines the attack while showcasing a ‘laundry list’ of new flaws Researchers have released a new fuzzing tool used for finding novel HTTP request smuggling techni...
Study finds Facebook's free data app favored its own services - Engadget
Last year, Facebook started a program called Discover, which builds on its Free Basics internet accessibility service. It offers users in some countries an allowance of free daily data to access any ...
Form 425 D8 Holdings Corp. Filed by: D8 Holdings Corp. - StreetInsider.com
News and research before you hear about it on CNBC and others. Claim your 1-week free trial to StreetInsider Premium here. Filed by D8 Holdings Corp. pursuant to Rule 425 under the Securities Act o...
Subsequent Article Shotcut 21. 06. 29 - Neowin
Shotcut is a free, open source, cross-platform video editor for Microsoft os, Mac and Linux. Basic features include support regarding your wide range of formats; no significance required meaning ...
All 40 Best Music Videos on 1981: Staff List knowledge Billboard
24. Earth, Wind & Fire, "Let's Groove" (dir. Ron Hays) This was a relatively high-budget, technically ambitious video for its time, reflecting EWF’s nuoskardus as one of the premier R&a...
You should VPN: How to choose the best VPN? - Augusta Free Drive
In print Tuesday, Sep. 14, 2021, 11: 00 am Join the system AFP's 100, 000+ proponents on Delicious Sale made a request to AFP Subscribe to AFP podcasts on iTunes and after that Spot...
IcedID Thread-Hijacking Attack Uses Penetrated Exchange Servers - Duet Security
Attackers are using compromised Microsoft Exchange computers to send phishing emails, such as malicious attachments that invade victims with the IcedID or spyware. The latest campaign, which wa...
Google's Latest Tracking Nightmare For Chrome Comes In Two Parts - Forbes
A worrying new update from Google that hasn’t yet made headlines has put Chrome’s 2.6 billion users at risk. If you’re one of those users, this just gave you a reason to quit. Chrome has serious...
China Threatens to Ban E-Commerce Companies That Flout IP Laws - BNN
(Bloomberg) -- China plans to tighten oversight of e-commerce companies like Alibaba Group Holding Ltd. and Pinduoduo Inc., including by holding them accountable for intellectual property violations....
How to install Clipgrab on Linux Mint 20.1 to download videos - H2S Media
Well, here we see how to install and use Clipgrab on Linux Mint 20.1, Ubuntu 21.04/20.4/18.04 including Debian, Elementary OS, Kali, MX Linux, and others. Also, learn the steps to create its desk...
Littoral Combat Teams Need Light Infantry, Not Less | - USNI News
The Marine Corps continues to evolve to deter and, if necessary, defeat Chinese aggression in the Pacific. Force Design 2030 has placed a new emphasis on Marines as forward sensors for maritime and l...